VISHNU’S UNPARALLED SUPREMACY is the verdict of Vedas without any second thought. All the devtas like Indra are subservient to him.

It’s a very common misconception that Vedas support polytheistic worship of devatas. Can there be Airs? No. Similarly, there can be only one God. Vedas declare that God is all-pervading. He is everywhere and in everytime. He is inside every aatman and outside too.

Q: Most of the mantras are dedicated to Indra, so Indra is greatest and Vishnu, Rudra are minor diety in Vedas.

Ans: This is height of ignorance. Does mentioning more number of times makes someone greatest? Suppose there are two persons. I tell one person 10,000 times, “You are great”. Then I move to 2nd person and tell, “You are greatest. Everyone merge from you. Your abode is the goal of seekers”. Now, common sense would say whom I want to say greatest.

For, though Vishnu is cosmic in nature, he dwells (jivase) in each being as its essence, spirit and strength (RV 1.155.04)

MEANING: Sri and lakshmi are your wives.

Meaning explained by Ramanuj: Here 2nd cha is used for Bhu devi and 3rd cha is for Nila devi.

i.e. Sri who is Lakshmi and Bhu are your wives, so is Nila.

What’s the reason behind saying so?

Hri (Bhu) and Lakshmi are your wives.

“Agni is the lowest and Vishnu is the highest among devas. All other gods occupy positions that are in between.”

Futhur, It is said the Devas derive their ower (shakthi), pervasion (vyapthi) and position (pada) from Vishnu, as he is the very source of all gods. He is the Supreme God

Agni is the ‘prathama’/first devata; Vishnu is the ‘atyuttama’/foremost devata; In between both of them comes Indra, vayu and other pradhaan devataas. Even for the agni and other devatas; only Vishnu is the protector.

prashatavityarthah: That’s the meaning of the sruti.

All yajnas are offering to Vishnu only. Vishnu is the Yajna Purusha.

Taittriya Brahmana 3.1.6.7 says, “He is the protector and preserver of the yajna. He is the Yajna pathi(master of yajna) whom all the sacrifices are meant to please“.

Vishnu is the supreme amongst devatas.

Vishnu as the best and the foremost (sresta) among all the gods.

4. The verses of Rig Veda 1.154 is called Vishnu Sukta(RV 1.154) . The first six riks of Vishnu Sukta (RV 1.154) revealed to sage Medhaatithi son of sage Kanva is the first Sukta in Rig Veda to be addressed entirely to Vishnu.

The Sukta states that Vishnu is the very source of all gods and the savior of all existence.

Yaska_charya explains, the term Vishnu is derived from the root “vishair” which brings forth the sense of pervasion (paryaptha). Vishnu literally means that which pervades (vyapad vishnuhuh). He explains, the essence of the term Vishnu is its brilliance, universal pervasion and omnipresence. That essential nature of Vishnu is brought forth through several expressions: Vishnu is ‘Vishnu vishateh ‘ one who enters everywhere; he is veveshti vyapnoti vishvam yah, the one who enters and covers the whole universe, or is omnipresent; and ‘yad vishito bhavati tad vishnurbhavati, that which is free from fetters and bondages is Vishnu.’ In other words, Vishnu is not limited by space, time or substance.

The Vishnu Sukta thus elevates Vishnu to sublime heights and regards him as the omnipresent dimension of the Supreme Lord. 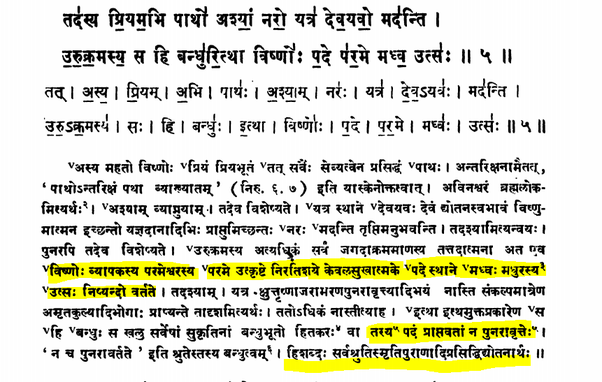 Meaning: Vishnu is the all pervading Parmeshwar. His abode is most sublime and place of non-extincting pleasure. On achieving that abode of Vishnu, one doesn’t return. Here ‘hii’ word means that Vishnu is glorified in Sruti, Smriti and Purans.

Poor logic of opponents that Vishnu here is not Lakshmipati, 4 armed Vishnu is rubbed aside by Sayana bhasya.

Meaning: ‘Gaavah’ is interpreted by Nirukta as ‘rays’. ‘vrishah’ means having all the desire fulfilled. Such is the supreme abode of Vishnu which is glorified in Vedas and Purans. Vishnu’s abode is effulgent, light emitting and people have all their desires fulfilled.

The chakra in the hands of Vishnu is also regarded as the solar splendor (RV 5-63-4). It also denotes the cyclical nature of time (sūryo jyotiś carati citram āyudham).

With the identification of Vishnu with Surya, Vishnu is hailed as the soul (atman) of the universe. The virtues and powers of Surya merged with that of Vishnu.

Indra, who does auspicious deeds, has Vishnu, who does exceedingly
auspicious acts, as his highest Lord (indrAya daivya). He (Vishnu) is
the sustainer and nourishes (these 3 worlds). He, who lives in the 3
places such as shvetadvIpa, in his vAmAna form protected the
ashvamedha yaj~na performed by his elder brother Indra and created
objects of pleasure for Indra, and secured a part of the yaj~naphala
for Indra.

As per Rig Veda 7.99; Vishnu is declared highest by the known and he created both the world (Heaven and mortal) and other devtas:

1. MEN come not nigh thy majesty who growest beyond all bound and measure with thy body.
Both thy two regions of the earth, O Viṣṇu, we know: thou God, knowest the highest also.
2 None who is born or being born, God Viṣṇu, hath reached the utmost limit of thy grandeur.
The vast high vault of heaven hast thou supported, and fixed earth’s eastern pinnacle securely.
3 Both these worlds, Viṣṇu, hast thou stayed asunder, and firmly fixed the earth with pegs around it.
4 Ye have made spacious room for sacrificing by generating Sūrya, Dawn, and Agni.
O Heroes, ye have conquered in your battles even the bull-jawed Dāsa’s wiles and magic.
5 Ye have destroyed, thou, Indra, and thou Viṣṇu, Śambara’s nine-and-ninety fenced castles.
6 This is the lofty hymn of praise, exalting the Lords of Mighty Stride, the strong and lofty.
I laud you in the solemn synods, Viṣṇu: pour ye food on us in our camps, O Indra.

19 Look ye on Viṣṇu’s works, whereby the Friend of Indra, close-allied,
Hath let his holy ways be seen.
20 The princes evermore behold that loftiest place where Viṣṇu is,
Laid as it were an eye in heaven.
21 This, Vishnu’s station most sublime, the singers, ever vigilant,
Lovers of holy song, light up.

HYMN XXII. Aśvins and Others

5 May I attain to that his well-loved mansion where men devoted to the Gods are happy.
For there springs, close akin to the Wide-Strider, the well of meath in Viṣṇu’s highest footstep.
6 Fain would we go unto your dwelling-places where there are many-horned and nimble oxen,
For mightily, there, shineth down upon us the widely-striding Bull’s sublimest mansion.

According to Bṛhadāraṇyaka Upaniṣad 1.4.11, “Indra” and “Rudra” are one of the kṣatriya devatas projected forth by Brahman.

In the beginning this (the Kṣatriya and other castes) was indeed Brahman, one only. Being one, he did not flourish. He specially projected an excellent form, the Kṣatriya – those who are Kṣatriyas among the gods: Indra, Varuṇa, the moon, Rudra, Parjanya, Yama, Death, and Īśāna. Therefore there is none higher than the Kṣatriya. Hence the Brāhmaṇa worships the Kṣatriya from a lower position in the Rājasūya sacrifice. He imparts that glory to the Kṣatriya. The Brāhmaṇa is the source of the Kṣatriya. Therefore, although the king attains supremacy (in the sacrifice), at the end of it he resorts to the Brāhmaṇa, his source. He who slights the Brāhmaṇa, strikes at his own source. He becomes more wicked, as one is by slighting one’s superior.” (Bṛhadāraṇyaka Upaniṣad 1.4.11) [translated by Swami Madhavananda]

Vishnu is described as one who gave ‘Rudriyam’ to Rudra:

“With offerings I propitiate the branches of this swift-moving God, the bounteous Viṣṇu. Hence Rudra gained his Rudra-strength“.

Furthur, a verse has been popularised by wrongly translating with use of poor grammer. Here, we are providing the correct translation:

Remember, Somah is one the names of Vishnu as been interpreted by all the commentators including Shankar as Vishnu having divine nectar of auspicious qualities.

Meaning: He who is dwelling in the SUN, is within the SUN, whom Sun doesn’t know, whose body is the SUN, Who internally rules the Sun.

Quite clearly, Brahman is one who rules Surya, being inside Surya. So, Surya can’t be Brahman.

All the names belongs to Vishnu

Vedas declare that Indra, Mitra, and all other names are names of Brahman.

“They have styled him, Indra, Mitra, Varuṇa, Agni, and he is the celestial, well-winged Garutmat, for learned priests call one by many name as they speak of Agni, Yama, Mataṛṣvan.” (Ṛg Veda Saṃhitā 1.164.46)

And, Brahman is their name giving father:

Brahman who has all these names is the give of names to the other devas:

“He Who is our preserver, our parent, the creator (of all), Who knows our abodes (and knows) all beings, Who is the name-giver of the gods – He is one; other beings come to Him to inquire.” (Ṛg Veda Saṃhitā 10.82.3) [translated by H.H. Wilson/Ravi Prakash Arya/K.L. Joshi according to Bhāṣya of Sāyaṇācārya]

In his bhāṣya, Sāyaṇācārya says that the other devas come to Him to inquire about their specific duties.

Vishnu as antaryaami of all the devatas and all the bhutas:

Meaning: He who, dwelling in the Agni is within the self, whom the self does not know, whose body the self is, and who controls the self from within, He is your Inner Controller and Immortal Self’. (14.6.7.9)

He who, dwelling in the Vayu is within the self, whom the self does not know, whose body the self is, and who controls the self from within, He is your Inner Controller and Immortal Self’ (14.6.7.9)

He who, dwelling in the Aditya is within the self, whom the self does not know, whose body the self is, and who controls the self from within, He is your Inner Controller and Immortal Self (14.6.7.9)

He who, dwelling in the Indra is within the self, whom the self does not know, whose body the self is, and who controls the self from within, He is your Inner Controller and Immortal Self’’ (14.6.7.9) 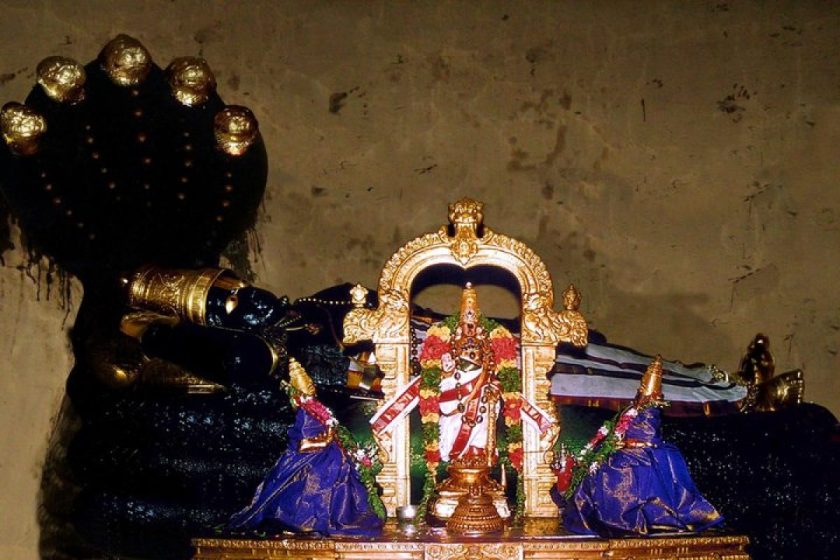 7 thoughts on “Vishnu-Paratvam in Purva bhaag of Vedas”