In the circles of intenet scholars, one can study various claims that avtaar-vaad is Puranic concept and none of the avtars are mentioned in Vedas. Another claims is that Vedic Gods are different from Puranic Gods which are worshipped today.

The truth is far away from their claims. All the traditional Vedic schools and ancient Vedic commentators including Sayan, Yaksha, Bhatta Bhaskar, Kumaril bhatta, Madhava, Ramanuja etc. have given us a treasure of meaningful commentries on Vedas. Certainly, with ovious motives of defaming Hindu culture and spreading Christian missionaries, foreigners wrote number of translations and commentries on Vedas. Their knowledge of Vedic grammer, Nyaay and meemansha remains questionable.

Meaning: These are the two sentences from vedas. First one says one who is birthless takes birth while second one says with every birth His fame or greatness increases.

Even Dayanand Saraswati in his yajurved Bhasya translates the verse in similar way only.

Vedas have mentioned several of the incarnations of Vishnu. Let’s take a look at some of them in the first part of our article:

After Indra lost all it’s wealth, on his request Vishnu took the incarnation of a dwarf brahmin and measured the entire universe in 3 steps. This story is mentioned multiple times in Vedas e.g.  Rig Veda 1.22; 7.99; 7.100 Atharv-Veda 7.26.

16. The Gods be gracious unto us even from the place whence Viṣṇu strode
Through the seven regions of the earth!
17. Through all this world strode Viṣṇu; thrice his foot he planted, and the whole
Was gathered in his footstep’s dust.
18. Viṣṇu, the Guardian, he whom none deceiveth, made three steps; thenceforth
Establishing his high decrees.
19 . Look ye on Viṣṇu’s works, whereby the Friend of Indra, close-allied,
Hath let his holy ways be seen.
20. The princes evermore behold that loftiest place where Viṣṇu is,
Laid as it were an eye in heaven.
21. This, Viṣṇu’s station most sublime, the singers, ever vigilant,
Lovers of holy song, light up.

Here is the Sayan Bhasya where is quotes Nirukta too:

Here, The story is mentioned how Indra killed tvasta (guru of devas) and Vishnu helped Indra to kill Vritasur. This too, is indirect reference to Trivikram avtar.

Satpath Brahman 1.8.1 mentions Matsya avtaar of Vishnu. Again, the story here is similar to that in the Purans.

1.8.1.4 when the flood has risen thou shalt enter into the ship, and I will save thee from it.’

1.8.1.5 when the flood had risen, he entered into the ship. The fish then swam up to him, and to its horn he tied the rope of the ship, and by that means he passed swiftly up to yonder northern mountain.

Vishnu instructed Manu to save the world by taking their subtle form in ship, which was protected by Matsya avtaar of Bhagwaan Vishnu.

In the Satpath Brahman 7.5.1; the Kurma avtaar is mentioned.

Also, in Taittriya Aranyak 1.23.3; the the story of Kurma avtaar is elaborated.

let’s have a look at both of them:

7.5.1.5. And as to its being called ‘kûrma’ (tortoise);Pragâpati, having assumed that form, created living beings. Now what he created, he made; and inasmuch as he made (kar), he is (called) ‘kûrma;’ and ‘kûrma’ being (the same as) ‘kasyapa’ (a tortoise), therefore all creatures are said to be descended from Kasyapa.

here, Prajapati is said to take the form of Tortoise or KURMA. Who is Prajapati here?

Here, The prajapati is said to be one from whom all creatures descend.

7:5:1:7 the tortoise (kûrma) is the breath, for the breath makes (kar) all these creatures: 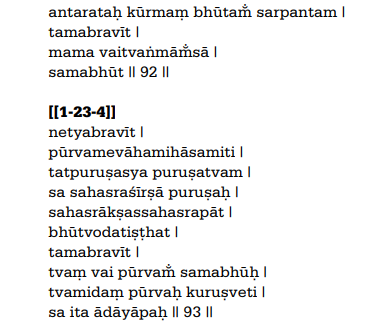 Meaning: From skin water of Brahma, Kurma was born. Brahma claimed Kurma, “You are born from me”. Kurma denied this. He corrrected Brahma by saying that he existed earlier. Kurma then showed his VISHWA-ROOP.

Sayan Bhasya on the verses:

Sayan clealy meantions it as ‘kurma’ avtaar of Vishnu, the parmatma.

In next articles, we would look into other avtaars:

Furthur, Varaha avtaar too is mentioned