Vedas are so vast. Upanishads are the quint essence of Vedas. All that is said in Vedas was given by Goda devi in Tamil language in form of beautiful songs. Each song speaks of some part of the Vedas.

In the first song she assured us that if we have real seeking attitude, interest, desire; that is enough qualification. He guides us to an acharya who provides essence of all the knowledge in form of mantra. That mantra generates love in our heart and then we start singing glories of the lord. Lord comes down to support the system of the earth in multiple forms. He descends to a place called vyuha in 4 forms:  Vasudeva, Sankarshana, Pradyumna, Aniruddha. Vasudeva is ultimate controlling abode while Sankarshana is abode to dissolve the system not working properly. Now, he want to redo the whole things and for that he chooses another vyuha called Aniruddha. All these system is supported by another vyuha called Pradyumna. Since he is so kind enough to step down and come to us, do namaskaram to that foot. Everyday we wake up, we first chant glories of his divine feet. When we are following vratam for him, we avoid luxurious things other than necessary for our daily conduct. We observe control over the food. We try to speak sweet since all the creation we see around is the creation of lord. Why should be speak harsh words to others other than when we need to rectify someone. Help the needy people and spend for good causes. Both kinds of charity we need to do. Just living is called ‘jeevanam’ while living in good way is called ‘ujjivanam’. Goda teaches us ‘ujjivan maargam’.

In 3rd verse, Gopis got curiosity and enquired Goda, “What are we going to get out of this vratam”? What do we get out of this Thirupavai vratam?  There are certain works done with selfish goals, harming the society (adhama). Other works which are done with self-interest along with the interest of environment and society (madhyama). Every creature of the universe is mutually related. Uttama or highest are those people who works without any expectation of results and in benefit of society and environment. All they want is pleasure of God. Although we don’t desire result, still it comes to us. Uttama people distribute them to the world.  Gopikas belong to the third category (Uttama).

Singing the praise of the Lord who rose and measured the worlds.

After glorifying para and vyuha forms, Goda is praising vibhava form of Lord. Out of his affection and kindness to help devas and also out of happiness that mahabali granted him 3 feet of hand, he grew tall and taller. Out of numerous vibhava avtaras, vamana avatar is discussed most in Vedas. Valmiki didn’t mention any other Vibhava avtaaram in Ramayana but he couldn’t omit Trivikrama avatar. Sathkopa Suri azhwar too had special love for Vamana and Varaha avtaara.

Bhagwaan is ever happy to do the work for other people’s benefit. When Samsaaris struggling with ahankaram and swatantriyam, one day wonders who will be the savior for him, Bhagwaan immediately rushes for help.

ulagu – all the three worlds

aḷanda – measured (with His divine feet);

When he measured all the worlds (with his 3 steps’ land), his foot touched all the people’s heads as he was fond of giving blessings to one and all. Even when some of them were not understanding his love to them, he still was fond of touching everyone like how a mother would hug her child sleeping next to her without thinking whether the child will be aware of her hug or not.

As he rose in size, even the discus, the conch, the mace, all became proportionally large. Commentators are eloquent in portrayal of the scene. Readers should mentally visualize. Bali was happy to havehave fulfilled his duty and Indra was happy as he could regain his wealth, but alas! None appeared worried as to what obstacles and injuries the foot would experience in its progress through space.

Sri Peria-acchān-Piḷḷai describes the four categories of people in this world:

The supreme Lord reduced himself not just in size but in status as well. What not Bhagwaan did for his devotees! Does anyone like begging? God became a beggar. Not for his own sake but for Indra. He didn’t even know how to ask, nor he knew the syntax for it. But Bali was captivated by his beauty and asked him to demand something. Finally, everyone got what they wanted and everyone was happy, Bhagwaan too was happy seeing his children happy.

He gave Sunlight without demanding any bill. What if we don’t pay electricity bill? Powe gets cut off. But Bhagwaan keeps granting us regardless of whether we aknowldege him or not.  He provided body, mind and intelligence after creation to aatmans so that they endevour for liberation. There is no selfishness on his part at all. He is always concerned about others.

Per paadi: sing names and glories of the Uttama Purusha.

If he is the gold bar, his nAma is like gold jewel. The ‘Name’ of the Lord possesses greater efficacy than even the Lord Himself. Karma, gyaan and Bhakti Yogis too chant names for either mundane goals or for moksha but for sarnagatas, saying his nAmams is swayam purushArtham (that itself is the goal), because, for the goal of reaching Him, he himself is the means. We have already surrendered to His lotus feet with the help of AchArya and Ramanuja.

We should never talk about adhama purushas. Not speaking about such people itself is a great quality since when we talk about them, their bad qualities too touch us and ultimately get spoiled. So, we should always sing glories of Uttama. We may not touch God but we can touch his names, taste it, feel it.

nāngaḷ– We (who cannot exist without chanting his glories);

nīrāḍināl – if we take a divine bath;

We would be able to meet and enjoy Krishna in disguise of the vratam as till yesterday our elders were policing us and not allowing to play with kannan. We would take our ritual bath overcoming our heat of separation. Bath here means mingle with krishNa with the knowledge of our (everpresent) relationship with Him (sambandha gyAna pUrvakam). Bathing in divine names and kalyaan-gunas of Krishna.

When Pandavas were in incognito, Bhisma told a wonderful trick to discover Pandavas- “The place where there is 3 spell of rains, no theifs, no diseases; believe that Pandavas are staying there only”. Why so? It’s because Padavas were always chanting the divine names of God. If there is presence of sincere devotees there will always be prosperity in that place.

In Raama Raajya, there were 9 days of Sunshine and one day of abundant rain. This cycle repeated itself every month. Thus, there were three periods of rain each month. The land was fertile and there were no inauspiciousness caused by water shortage. Such prosperity will arise from the proper observance of ThiruppAvai Vratha.

kayal ugaḷa – fishes wriggling among them;

Paddy would grow tall just like Trivikrama, without use of manures and hybrid seeds. (Great ācāryas like Sri Bhaṭṭar and Sri Ālavandār, if they happened to see red lotus flowers in paddy fields, with full-grown paddy stalks bending before them, used to be reminded of the lotus Feet of the Lord, being worshipped by many devotees prostrating themselves). Like how mArIchA out of fear saw rAmA in every tree, after he was thrown far away by rAmA, here the gOpikAs see vAmana when they see tall grass.

Sufficient Water nurtures the crop. Wonderful fishes, having grown big like baby elephants would jump between the paddy.

Taking divine bath is Upadesham of Sarnagati by Sadacharya to Shishya. Shishya gets rid of feeling of svAtantriyam (feeling independent of Narayana) and thus giving too much importance to body and material comforts. Three times rains indicates development of 3 baisc qualities in us:

There would be abundant water means Upadesam, study of  Prabhandhams and enjoyment of the ArchA moortis at their dhivya desams through pilgrimages. The strong fishes jumping with joy in the paddy fields are the happy AchAryAs, who recognize that their have borne fruit. Fish used to be cultivated in the paddy fields to eat the mosquito larvae.

Another interpretation is that Goda would cherish to be a fish in this stream to be able to gleefully witness Lord Ranganatha. The fishes would grow fat with fertile food (bhagwat, bhaagawat and acharya-anubhavam). They simply jump and dance and enjoy with tearful eyes, the ever-beautiful form of Lord.

On the freshly blossomed blue lily flower; pōdu, the bees that enter the flower to drink the honey due to the beautiful surrounding and doze off peacefully on the flower. 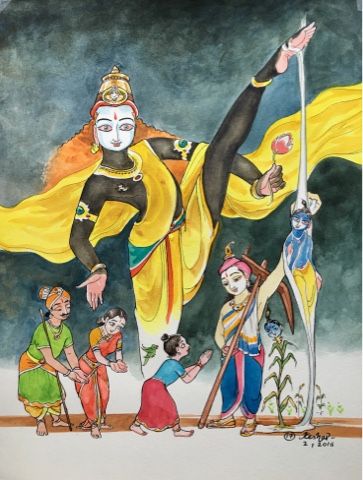 Andal longs for such an experience in Krishna-contemplation. Andal aspires for the experience of a beetle that sat on the blue lily to suck honey and remains there for whole night. Varvar Muni too explains the arthanusandhaan of ‘Dvaya-mantram’ like a sound making bee sits on flower and starts silently drinking the honey.

It also refers to Sriman NarAyaNa sleeping without worry in our heart lotuses (Hrudhaya Kamalas) that His work through His AchAryAs has been successful. He sleeps like a content farmer, who has realized abundant crops.

pukkirindhu: get to and try

seertha mulai pattri: by holding with both the hands the big nipples of

The overflowing udders of the cows are so full that no effort is needed to milk them, but huge muscle power needed to lift the pot. Place the pot and it gets filled with milk automatically and again replace it with another pot. Even very strong cowherds hesitate to milk these cows as the cows are capable of filling innumerable cans by just the touch of the udder.

The benevolent cows that fill pots with prosperity are prosperity and wealth of Braja. Every home is filled with ghee and butter. No effort in taking out the milk but huge effort needed in churning them. So much butter is filled in the milk as the cows grow with Krishna, with the touch of Krishna, hearing music of flute of Krishna. This is natural generosity and fulfillment of God’d will.

Cows refers to the most generous AchAryAs, who do not expect any returns. The four udder through which this milk of Knowledge flows are: Vedam, Smruthi, Saathvika PurANams and AzhwAr Paasurams.

Our body is the field. It’s not just ordinary rain that fall but its great fall of our great guru’s words by which inner diseases like jealousy, ego are calmed down. Thus, our body becomes good fertile land (kshetram).

It yields many good crops i.e. good qualities in us which enjoy and shares to others. Thus we would be able to help people like cows. Real wealth of our’s is to serve the Lord and his world.

Just like when u plant trees for shade, it would give fruits. Along with that birds would find shelter, environment gets cleaned, rains come, similarly when we perform activities to please lord, we even materials comforts in this life too.